Photos from the petegrafton collection

Zagorz, south-eastern Poland. US Doc, believed to be Dr A Seyfried, on the right.  Summer, 1958. 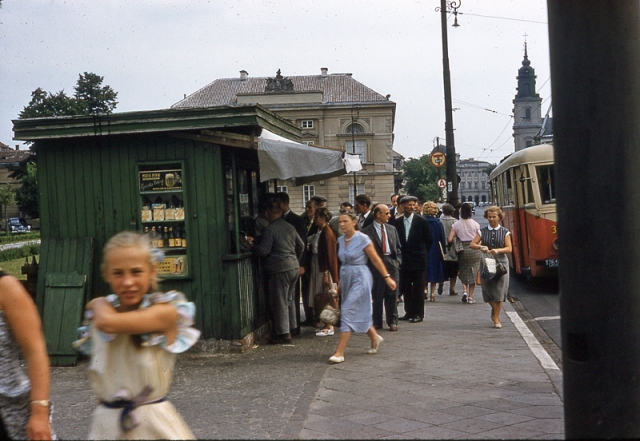 US Doc, an orthopaedic specialist, in Prague, summer 1959.  His name is believed to be Dr. A. Seyfried.

We have, at the moment, no idea how it was that the American Doc, believed to be Dr A Seyfried, an orthopaedic specialist, was visiting Communist controlled countries in the Eastern Bloc. (My very grateful thanks to Liz Willis, former librarian with the Medical Research Council, London, for searching and locating in Pubmed papers written by a Dr A Seyfried. By their speciality – mostly in arthritic and rheumatoid conditions, and period of publication – 1953 – 1999,  and that these papers were mostly published in Polish specialist publications, and one published in a Czech  publication, we can be reasonably sure this is the one and same person. The full Pubmed list is at the foot of this Post.)

The Cold War was at its height – the Hungarian Uprising had been put down by Soviet tanks and military in October 1956 –  less that 18 months before these photos were taken in Poland, and Poland itself had had significant demonstrations in Poznán in 1955 against the Stalinist Soviet/Communist regime, which shook the Communist hierarchy and brought temporary “liberalisation” which turned out to be temporary concessions by the Polish Communist leader Wladyslaw Gomulka.

It may be that Dr.Seyfried, and a colleague were working for, or attached to the World Health Organisation in Geneva.  In transparencies from Czechoslovakia a Mercedes with Swiss plates is shown.

The photos – Kodachrome transparencies – were mostly taken by a colleague – possibly also a visiting US doctor – of the “US Doc”.  They were bought on ebay in 2008.  The seller had additional sets of photos taken  – by the same source –  of visits to Czechoslovakia and Hungary in 1959 and 1960, which will be appearing during March, 2018 on petegraftonphotos.com 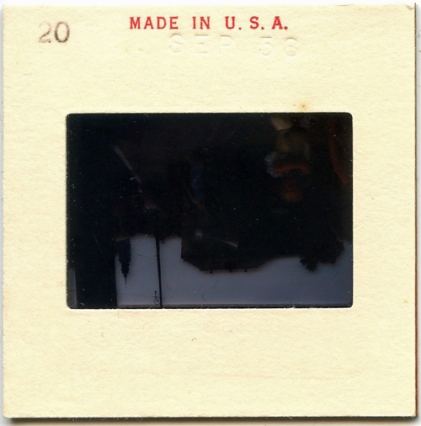 The transparencies shown here are selected first by the orthopaedic interest, and then by local photos, outings and so on.  They are a rare colour chronicle of aspects of everyday life, and civic life,  in countries that were to live under Communist/military control  in Eastern Europe for a further 32 years from when they were taken. And, of course, they show orthopaedic practices and care of children and adults at that time.

Please use the Leave a Reply facility to get in touch if you can identify towns, places, people, or anything you spot and can clarify.  It would be very much appreciated. 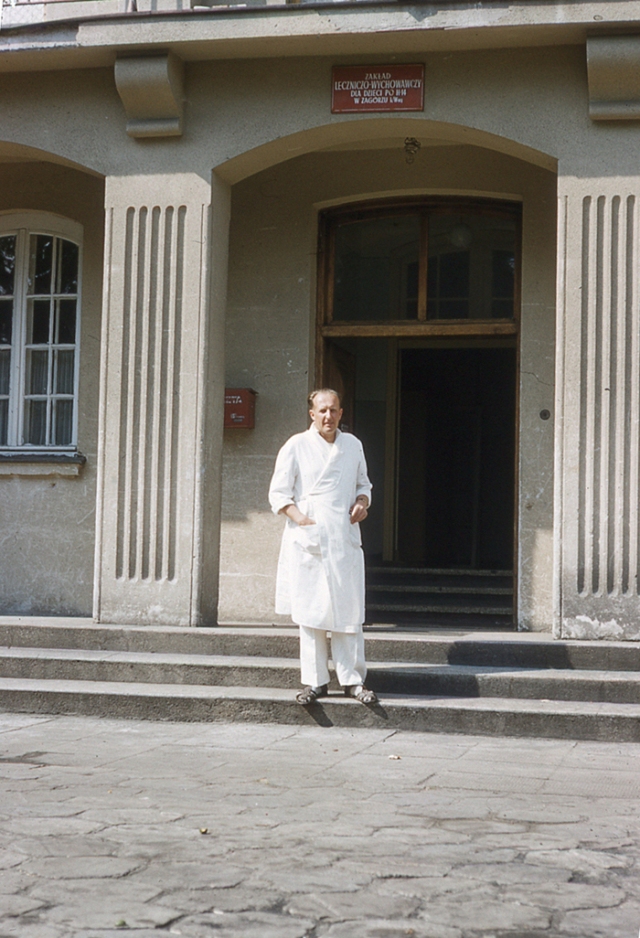 Childrens Hospital, Zagorz, south-eastern Poland. Possibly Dr Kowalski, Summer, 1958. The literal translation on the sign reads “Educational Institute for Children” and the town is identified as Zargorz, in south-eastern Poland.  It is suggested that the “Institute for Children” is a children’s home/hospital for general health issues.  My thanks to Darek Machaj for the translation of the sign.

“Dr Seyfried, Kowalski’s Hospital”. If the note on the transparence storage box is the match for the transparency, Dr Seyfried would be the “US Doc”, on the right. It is assumed it is the Polish Doctor Dr Kowalski standing next to him.

Young boy in hospital cot, believed to be Zargorz.

Young children with orthopaedic problems outside on cot beds, believed to be Zagorz.

Nurse and young children with crutches, orthopaedic unit, believed to be Zagorz.

Young child with crutches, with nurse, orthopaedic unit, believed to be Zagorz. 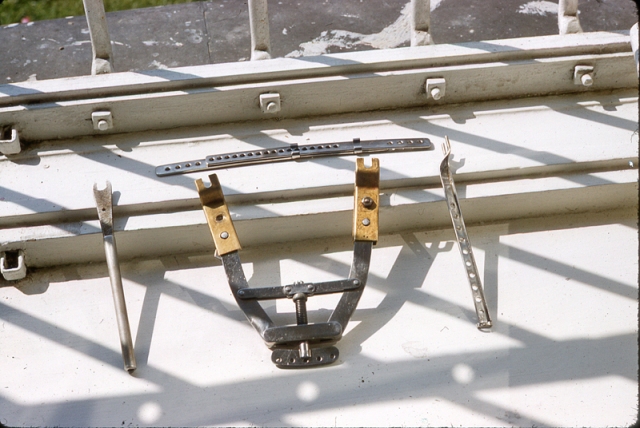 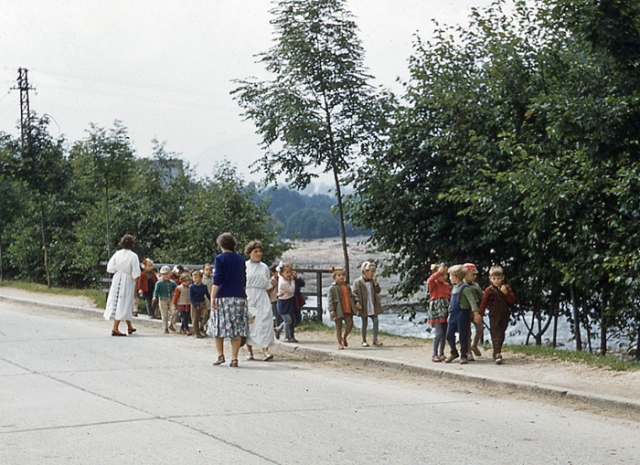 Primary class children out for a walk, believed to be Zargorz.  Possibly the River Oslawa down from the road.

Polish men (and boy) in traditional outfits. US Doc in grey suit on the right.  Unknown location. 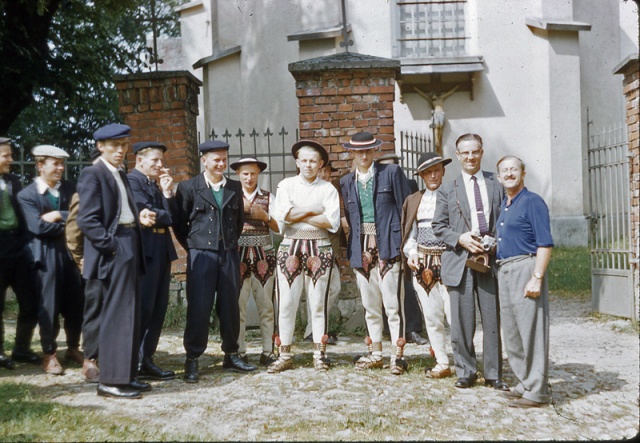 Polish men, some in traditional outfits, with the US Doc and assumed to be Polish colleague, or host, in blue shirt.  Note church behind them. Unknown location. 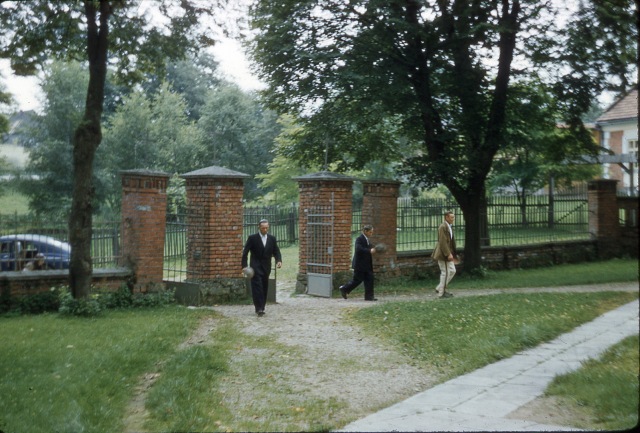 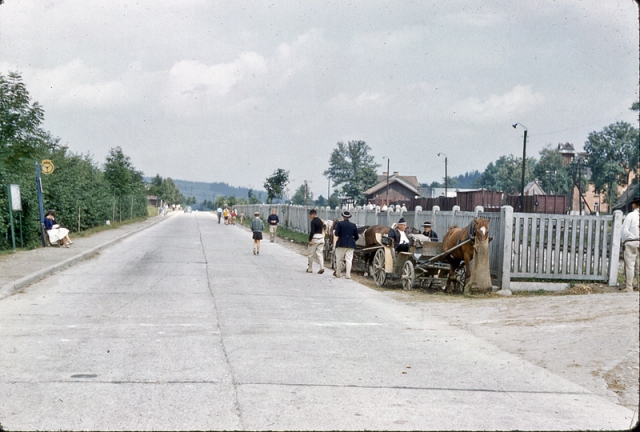 A visit to a house in the countryside. Note the chicken, the apple trees and the bare-chested man taking a break, with building work in the background. No I.D. for the formerly dressed woman, or for the location. 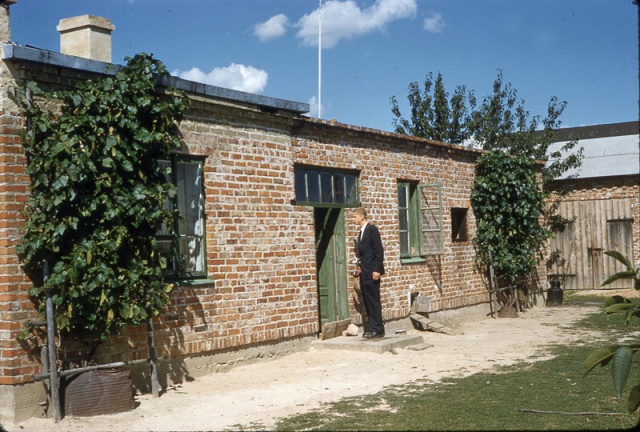 Note the ramp up to the chicken house and the short piece of plank to stop chickens wandering into the attached dwelling. Unknown location.

A lovely summer’s day in Poland, 1958 and a smiling group of country women and girls. The smart casual gent in the dark blue shirt is in the background looking at how the building work is going. Unknown location.

Statue of Workers, with the US Doc, Dr Seyfried.   Believed to be Warsaw.

Statue of Workers, believed to be Warsaw. The gent in the western style suit is perhaps the US Doc’s US medical colleague, and if so, he is the one who is taking the bulk of the photos that we see in this collection of Eastern Bloc photos. 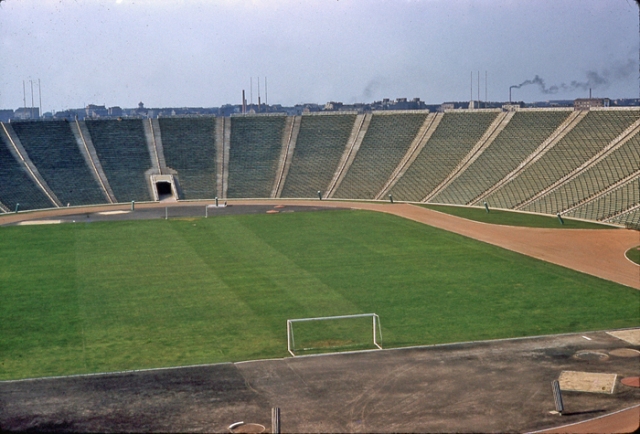 It is a 243 mile drive (391 Km)  from Warsaw to Zagórz and Zagórz is close to the border with the Ukraine, and with Slovakia (Czechoslovakia as it was, in 1958).  The following photos are assumed to be within Poland, for lack of any other identifying evidence.

The same road and hose pipe as in the previous photograph.  Dr. Seyfried having his photograph taken with a lady with a good suit, hat and handbag – a Polish medical specialist colleague?  To their side, cobblestones.  Poland 1958.

Formal municipal park assumed to be in a medium-sized town.  Note the pre-1939 studio plate camera on the tripod, foreground right.  Poland 1958. 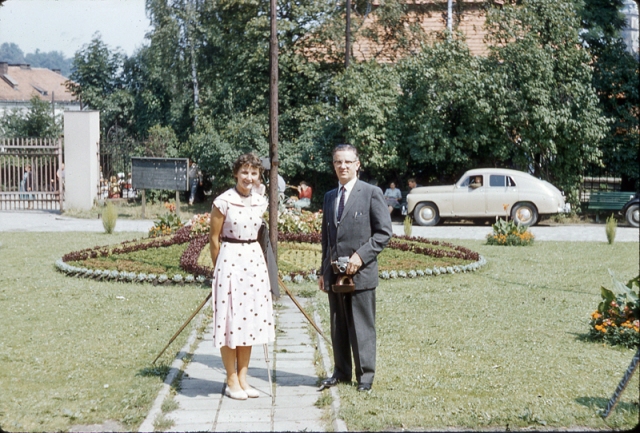 The same park with US Doc and young summer frocked woman. Possibly a Polish Tourist Agency Host (if so she would possibly also be a Communist Party member, and, either way, she would be required to report back to the Polish secret police, the “SB” on the US Doc’s attitudes/views, when in her company).  The car parked in the background (which may be their form of official transport in this part of Poland) has been identified as probably a Polish made Warszawa M20, modelled on the Russian Gaz M20 Podeba.  My grateful thanks to Peter Frost for identifying this car, and others that follow in this Post.  Also my thanks to Mel Holley of the IFA Club and Ian Reid in facilitating the identification. 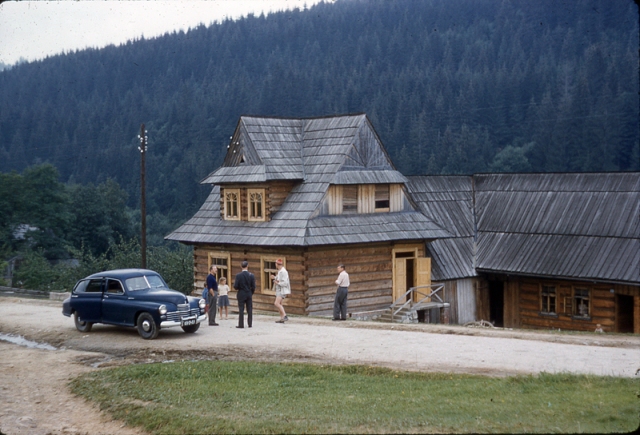 US Doc and others by a new Alpine style house and attached barn. Note the size of the over-hanging eaves, typical of such alpine buildings. It looks like a Warszawa M20 car. Probably in the Carpathian Mountains area. Poland 1958.

View of fortified town. Glimpse of river below. US Doc in centre of photo. Poland 1958.

Two Americans on the right, assumed to be with the US Doc. The car with the American styling has been identified by Peter Frost as a French made Simca Vedette Versailles. A viewer to this Post has identified the registration plate: “The car has a Bulgarian registration for Sofia”.  (Sofia, capital of Bulgaria.) Unknown location. Note the concrete steps, on the left, up to the grass, and kerb stones, indicating some kind of municipal/civic feature.  Despite the lushness of the greenery it is possible this is Bulgaria.  The car would suggest it is and the man being given a light is possibly their Bulgarian Tourist Agency/minor official attached to them for Bulgaria.  He appears in  photos below.  1958. 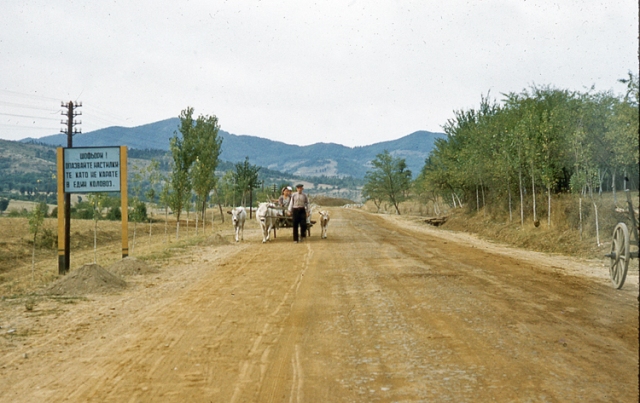 Untarmacked highway in the countryside, with oxen pulled farm cart, husband and wife, and a calf. Bulgaria 1958.

“Committee for Friendship and Cultural Relations with Foreign Countries”and the American Doc, Dr Seyfried.   The unsmiling man with him has the look of a Communist Party functionary. Going by the body language and physical space between them, the “Friendship” is very guarded.  The location is outside the Committee HQ in Boulevard Ruski 5, Sofia, Bulgaria, Summer 1958. (See below on a released declassified CIA document on the function and distribution of Committees for Friendship and Cultural relations with Foreign Countries. It is from this document that we can identify the address of the above photo)

A Top Secret  1957 CIA report on the function and distribution of Committees for Friendship and Cultural Relations with Foreign Countries was declassified in 2000.  These Committees were fronts for information gathering on the military, economic, industrial and other expertise of foreign countries.  It may be that all of Dr. Seyfried’s visits to Poland, Czechoslovakia, Bulgaria and Hungary were set-up and facilitated by these committees.  We don’t know whether he and his US colleague/s, at this time, were attached to the World Health Organisation (WHO) in Geneva, or were senior staff of US Teaching Hospitals.  It is assumed that they and other visitors out-with the host country would be briefed (depending on their speciality) on keeping circumspect in some areas of  their expertise.  It is also probable that some foreign visitors would also be involved in intelligence gathering themselves, at the request of their own security services.

It seems that Dr.Seyfried and his US medical colleagues were given a fairly slack rein in their social contact with their host orthopedic colleagues and their families.  It is assumed a lot of medical specialities were benign, including orthopedics.  Some, such as microbiology, with it’s possible uses in germ warfare, would not have been.

Oxen drawn cart in the countryside, with wife and husband. Unknown location, believed to be Bulgara. Summer 1958.

US Doc listening to elderly head-scarfed Bulgarian woman holding a loaf of bread.  The young man to the right, with the see-through shirt and pack of cigarettes in the breast pocket is possibly an attached host from the Tourist Agency, or Committee for Cultural Relations.  He appears in a further photo.  Lovech, Bulgaria. 1958.  (1)

Elderly woman on a donkey in a covered, shop-lined bridge. US Doc to his left looking at a brochure. The skylights are open at top. A warm summer’s day.  Lovech, Bulgaria. 1958.

American Doc, second American and Bulgarian host, seen in two earlier photos.  The acronym, on the building (church?), in the Bulgarian cyrillic alphabet has yet to be understood.  Bulgaria, summer 1958.  (This building is now known to be a 17th century baths in Lovech.   See note below)

“The two pictures of the covered bridge from Bulgaria are definitely from Lovech. They are particularly interesting as the bridge was reconstructed in the early 80s and does not look like this any more.

The unidentified building (church?) is actually an old public baths (“БАНЯ” in Bulgarian) again in Lovech. The building is from Ottoman Empire times (17th century) and still exists today. It is currently a museum.”

Pete Grafton writes: I am very grateful to Zzazzo for identifying (04.06.2018) the town with  the covered bridge and what I thought was possibly a church.  Thanks very much, Zzazzo, for this information.  It is very much appreciated.

Women with a child, and behind them a bare-footed woman, possibly Roma. Bus further down the street with man hauling up luggage to the roof. Newly planted pavement trees.The drab military green lorry is not necessarily an army lorry. Unidentified rural town. Bulgaria, summer 1958.

(1)  At Lovech a Concentration Camp was built by the Bulgarian Communist government  and opened in 1959 the following year from when these photos were taken.  It is estimated that approxiamately 150 people perished in the camp.  The camp was closed in 1962.  There will be a Post about the Lovech camp in the autumn of 2018 at petegrafton.com.

The articles written by Dr A Seyfried and listed in Pubmed are reproduced below the “Coming Soon” section.

US Doc in Eastern Bloc 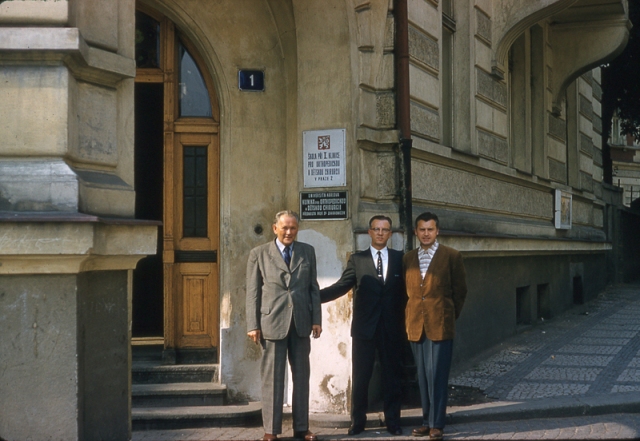 Entrance to the Universita Karlova Klinika Pro Orthopedickov, Prague/Praha. US Doc centre, with possibly the clinic director on his left. Summer 1959.

The Swiss registered Mercedes used by the US Doc in Czechoslovakia. Believed to be near the centre of Prague. 1959.

A countryside visit to the family/friends of a Czech orthopedic colleague. Summer 1959.