Dad and doggie in the heather. 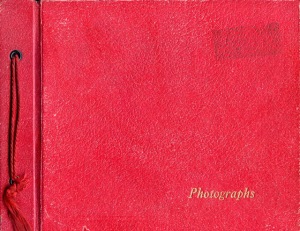 A selection of photos from a Scottish photo album, bought in Innerleithen, Scottish Borders, 2007.  The black and white and colour photos span 1954 to approximately 1957/58.  This is the post-war period when, in 1957, Harold Macmillan said that those in the United Kingdom Had Never Had It So Good.  Macmillan’s  grandfather was the son of a crofter who lived at the north end of the Isle of Arran, in the Firth of Clyde. 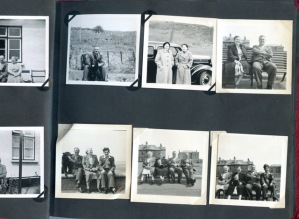 The Upper Classes and Middle Classes had always had it good, but there was some truth in Macmillan’s statement when comparing the spending power of skilled working class of the 1950s with their pre-war parents and grandparents.  There were more paid holidays, and more money to be able to put away the work bicycle in the shed, or sell the motorcycle and side car that had been used for the family outings, and buy a car, even if at first, a second hand car.

And after that, a new car, and outings in it at the weekend for a picnic or stay in the countryside or by the coast.  The British electorate didn’t, on the whole, disagree with MacMillan.  They returned the Conservatives for a third term of Government under him in 1959.  When these album photos were taken Anthony Eden had led the Conservatives to their second consecutive government in the 1955 General Election.  Scotland sent 36 Conservative MPs, 34 Labour, and I Liberal MP to the House of Commons in London that May.

Ford Anglia.  Somewhere in Scotland, 1954.  Production of this Anglia model stopped in 1948.

Photograph of the Ford Anglia above taken on 25 July 1954.  This is one of the few photos that have a date written on the back.

A pint of milk and a Kilner jar of sugar in the boot. A Shell petrol can and a Mobil oil can in the foreground.

The gent above, on the right, is a close friend/relative.

The Two Mums, and Ford Anglia

Dog in the front seat well.

He was a well loved dog belonging to the family of the Mum, Dad and Son and photos of him appear throughout the photo album.

Doggie and family car on an outing. 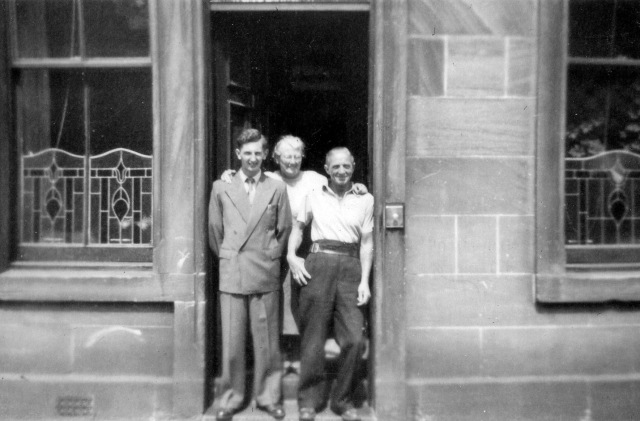 Mum, Dad and Son at their front door. Unknown location, possibly Stirling or Dundee.  “1955” written on the back. 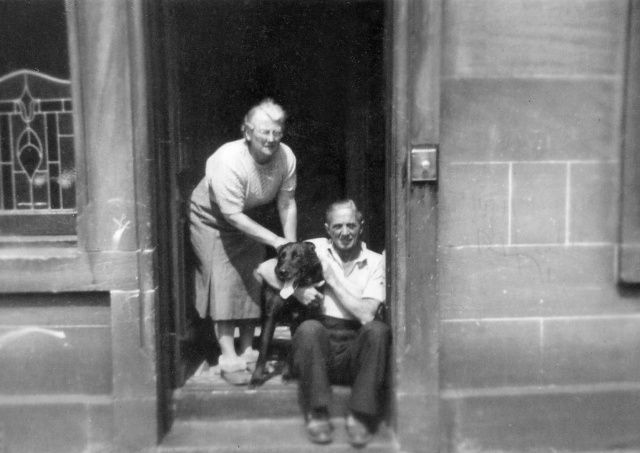 The Ford Consul above was introduced in 1951.  The Ford Prefect behind it went on the market in 1953.  The cars above were possibly bought second hand, in a “near new” condition.

A nice bunch of honeysuckle. 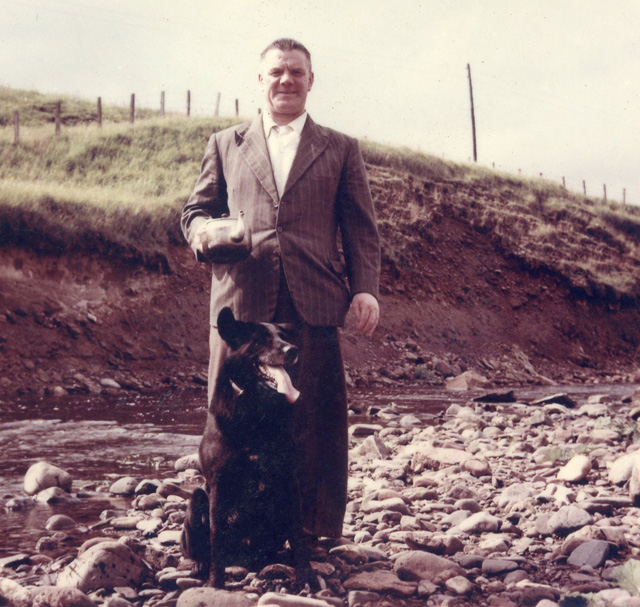 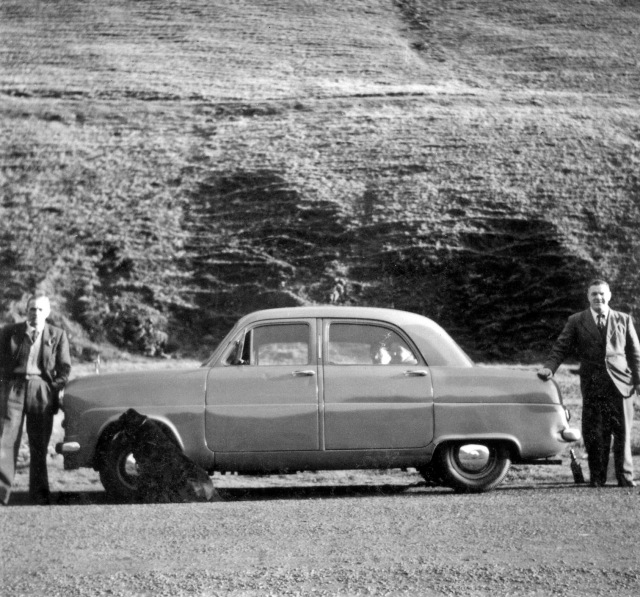 The Ford Consul, two pals, a dog and two women in the back. 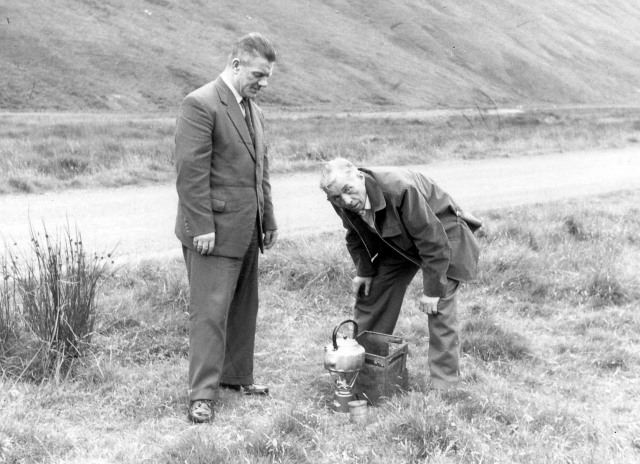 Brewing up.  Biscuit tin being used as a wind shield.

Weekend bliss: collapsible picnic chairs, portable radio on the car roof, and reading the Sunday newspapers. One of the ladies in the back is reading The People. 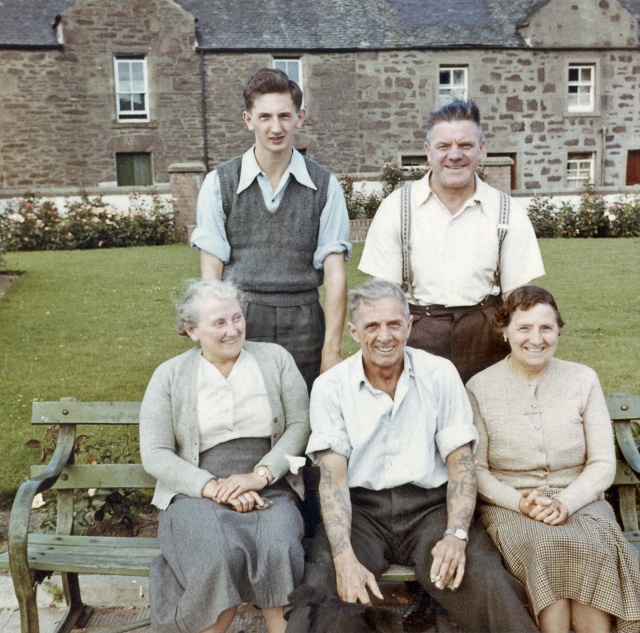 Unknown location. Possibly Firth of Forth or Fife Coast

Dad, unknown location, but believed to be on the east coast, Scotland.

Dad has impressive tattoos – note the coat of arms on his chest.  They suggest he was in the Navy,  or possibly the Army.

Doggie, Dad, Mum and Son on a seawall.

The United Kingdom had never had peacetime conscription until the Labour Government brought it in, in 1948.  It was a Conservative government which in 1957 (the same year as Harold MacMillan’s “Never Had it So Good”) announced it was getting rid of conscription, with a phased reduction.  The last conscripts were called up in 1960 and the last conscripts  discharged in May, 1963.  In May 1963 the Beatles From Me To You had already reached No.1 in the UK charts. 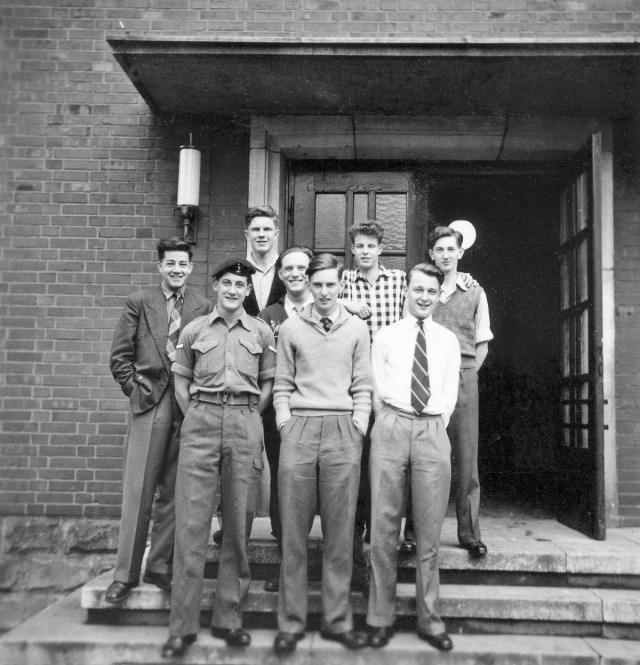 11 Air Formation Signal Regiment building, north west Germany.  The son is on the right in the back row.

It is estimated that the son was probably born 1937 0r 1938, and would have been around eighteen when he was called up.

Bahnhof (station) entrance, with Bahnhof cafe on left. Unknown small town in north west Germany.  Possibly near the British barracks the son was stationed at.   Circa 1956.

Photo of typical house/farm in the area covered by the British Army of the Rhine (BAOR), particularly in the northern area.  Photo circa 1956. 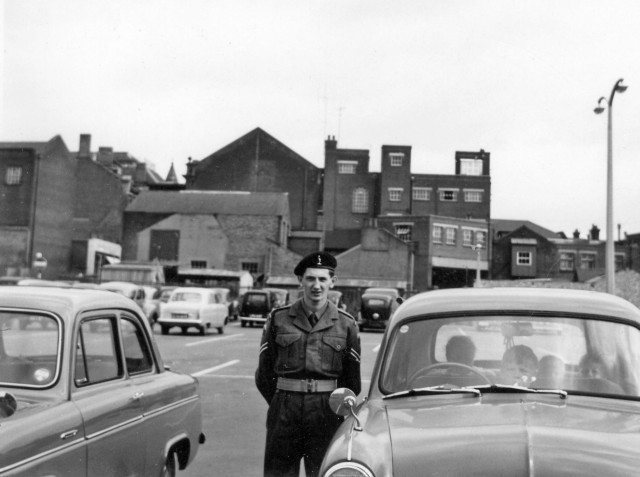 Son with rank of Corporal. Presumed to be on leave.  Unknown location in Scotland.   Note the Ford Consul and Ford Prefect.

Paris, 1957. Paris is a good days’ train travel from the BAOR area. An extended week-end leave? The son is second on the right, with an icecream.

Bateau- Mouche on the Seine. The son is back row, right.

Moulin Rouge, Paris, summer 1957.  We know it is 1957 as the film showing is the 1957 release Police Internationale (Interpol) with Anita Ekberg, Victor Mature and Trevor Howard.

11 Air Formation Signal Regiment board and conscript group, including the son.   British Army of the Rhine.  Probably summer 1957.

It is difficult to know whether the son is back home here, having been demobbed, or on leave. Note the portable radio on the right, at the back.  Unknown Scottish seaside location. 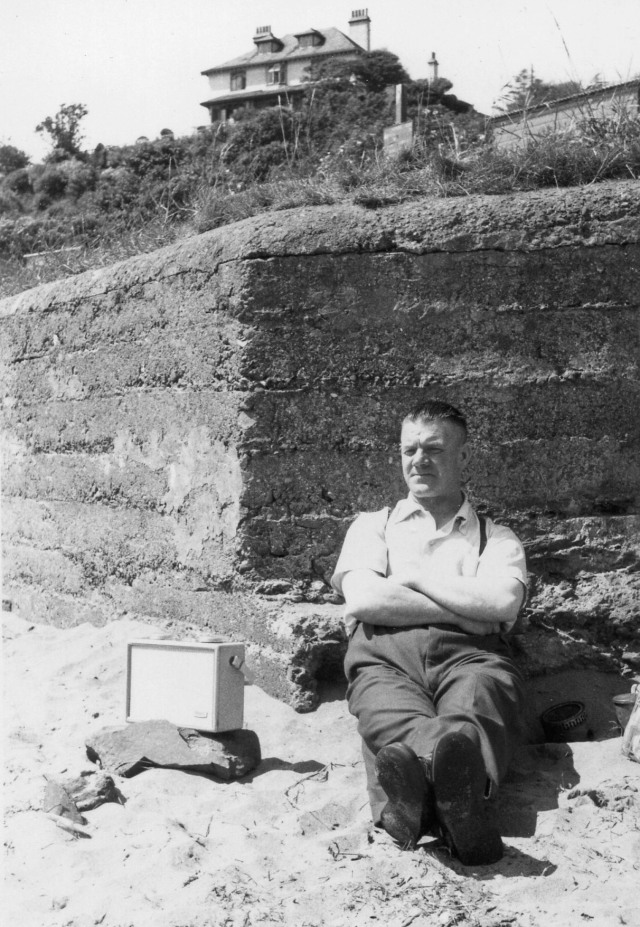 Mum and Dad with doggie and friends by a caravan.  Unknown caravan site.

The Son, the Ford Consul, and doggie sloping off on the right. 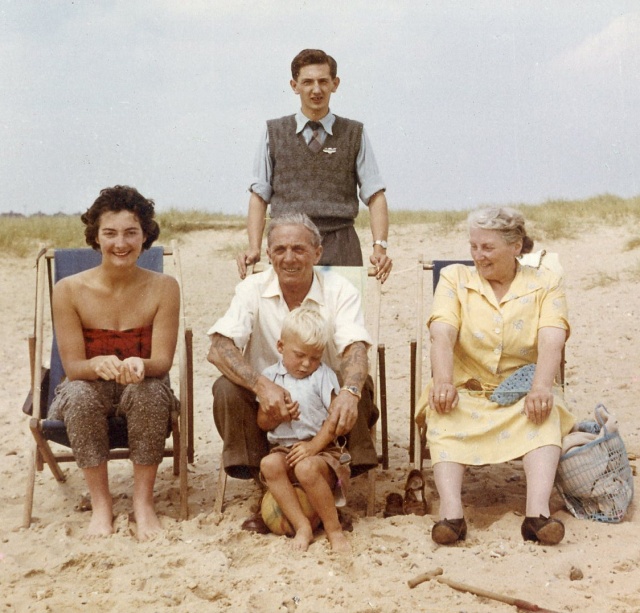 The same day, further along the same beach. Mum and Dad, Daughter and Son and Grandson. 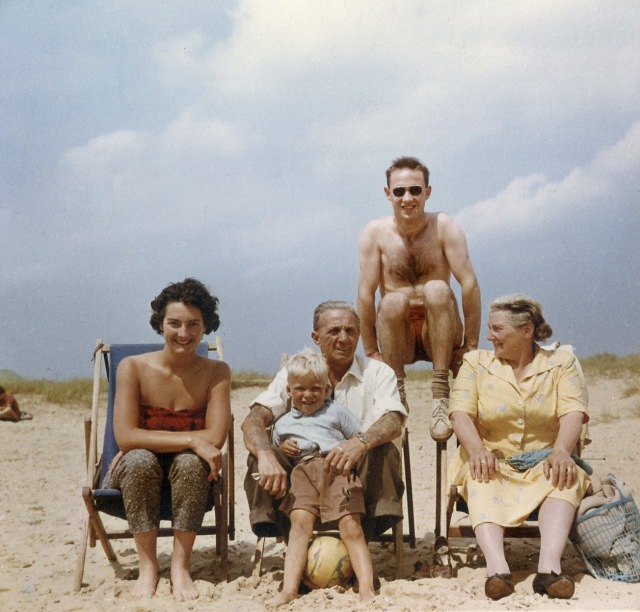 The gent balancing at the back on the deck chairs is assumed to be the son-in-law.

End of the day? 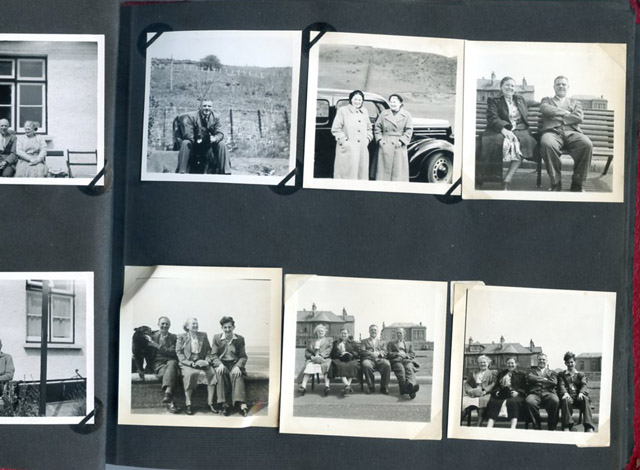 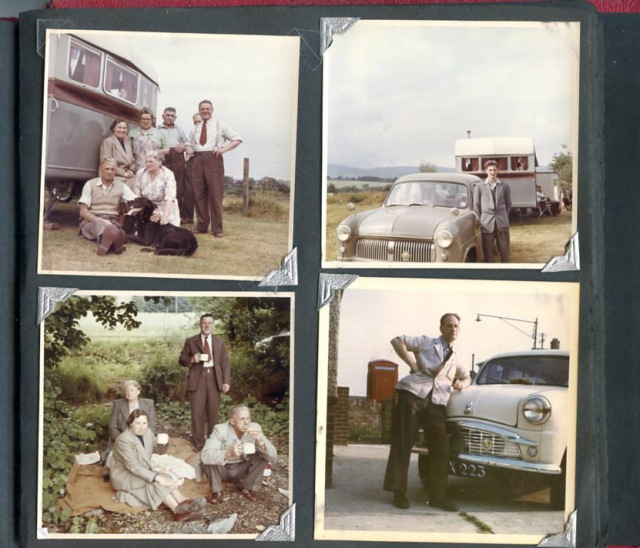 There are always difficulties in trying to establish a narrative from an album of photos, and there are always mysteries.   What seems obvious turns out to not be obvious.

Who pasted in the photos in this album?  Did several family members and friends take the photos?  In some photos one can see in seated groups that the two men – Dad and friend swapped taking the photo. But that was only occasionally.  Who was taking the colour photos, using a very good quality camera?  Another (unseen) brother or sister?  And on the beach scenes where the grandson was photographed, they switched from the precious and expensive roll of colour film to a roll of  the cheaper black and white film.

Often it is the person who takes the most family photos over a period of time who is the one who is missing from the family photo album.

There is no indication where the family lived.  Three photos in the album suggest it was not Glasgow or Edinburgh. 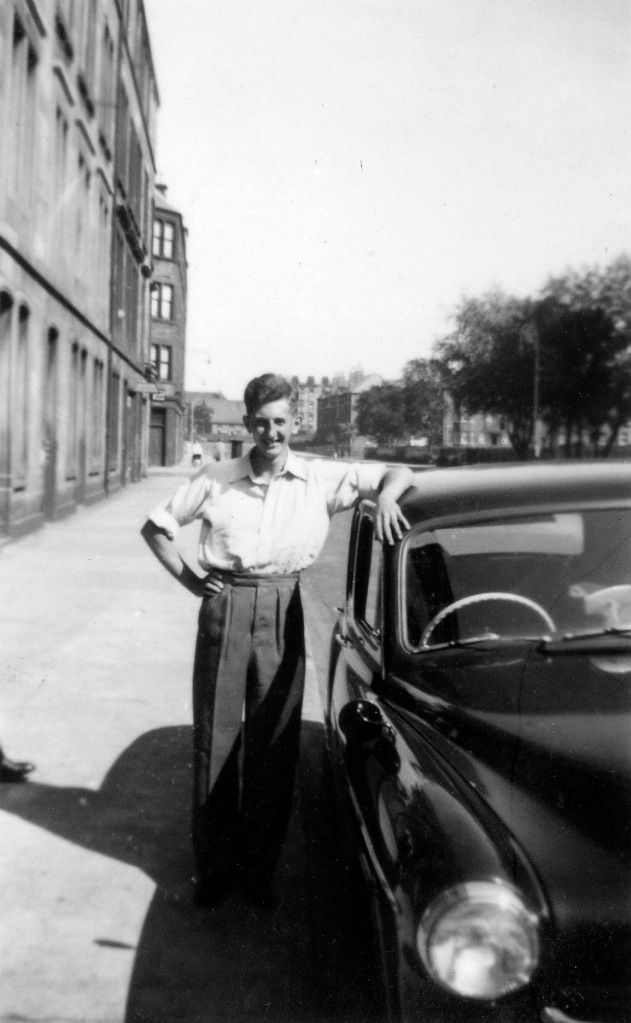 Photo 2.  Son posing for the camera opposite front door, street and tenements behind him.

These are four storey tenements.  To see tenements like these with private front doors on ground level, and presumably open entries for access to the upper floors is not seen in Glasgow tenements.  In addition, had they  lived in Glasgow one would expect to see photos of the Ayrshire coast, Rothesay and Loch Lomond in the photo album.  There aren’t any.

Day excursion type photos of Edinburgh in the photo album suggest that Edinburgh wasn’t their home either.

Photo 3.  Photo of Princes Street and Edinburgh, taken from the Castle, circa 1955.

As has been suggested earlier, perhaps either Stirling or Dundee was home.

Long out of print, Soho Night and Day is a 1966 Soho survey written by Frank Norman, with photographs by Jeffrey Bernard.  Being part of the Soho scene, they knew intimately what they wrote about and photographed, and few doors were closed to them.

In October, 2007 Pete Grafton revisited the Soho streets he had occasionally known in 1966, with a copy of Soho Night and Day. 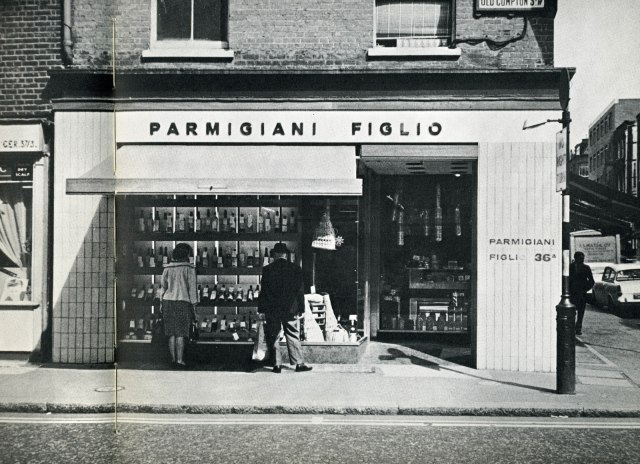 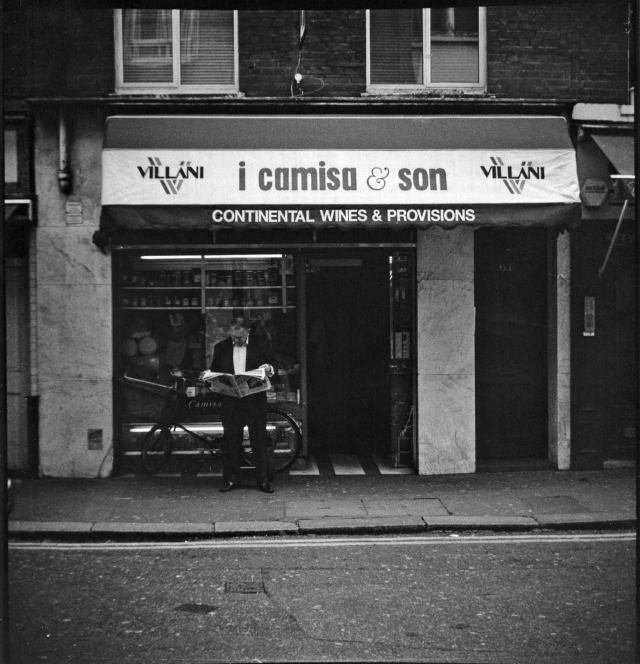 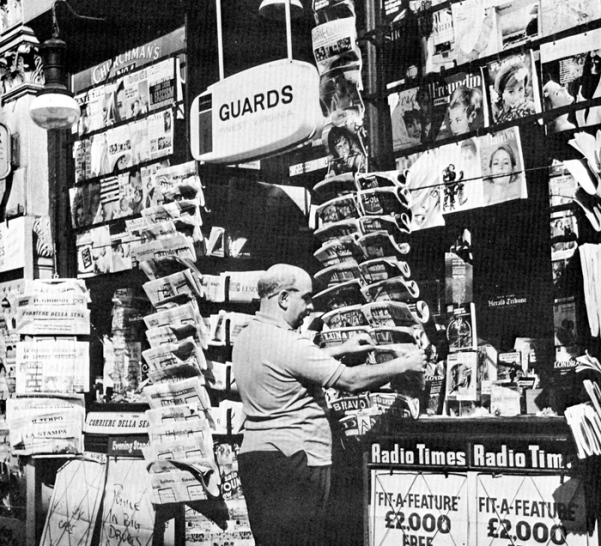 The newsagent at his stand is Tony Abbro, who opened the shop in 1961.  There is also a photo of him taken by the photographer John Deakin a few years prior to Jeffrey Bernard’s photo. 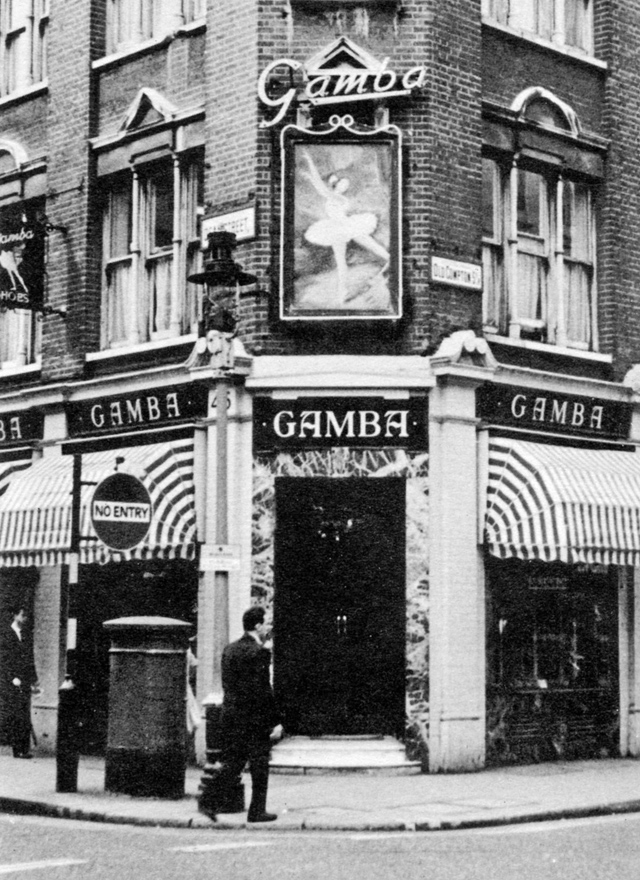 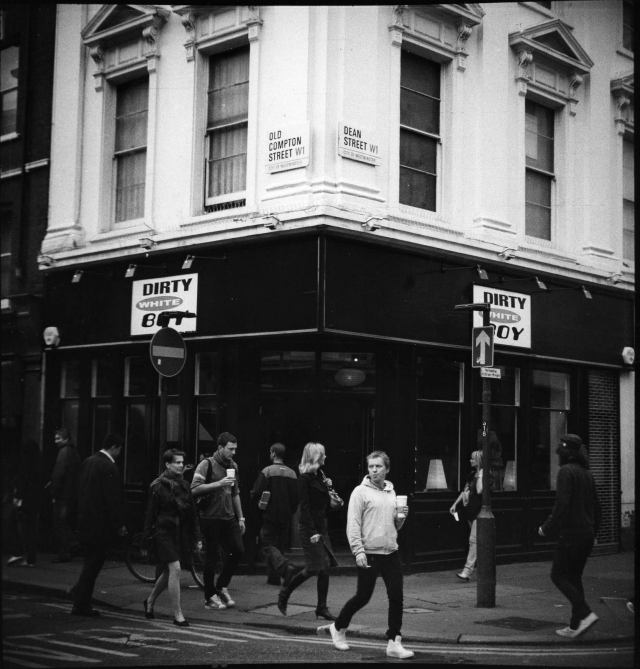 In 2017 Lina Stores is still trading from the same shop in Brewer Street and now has a website. 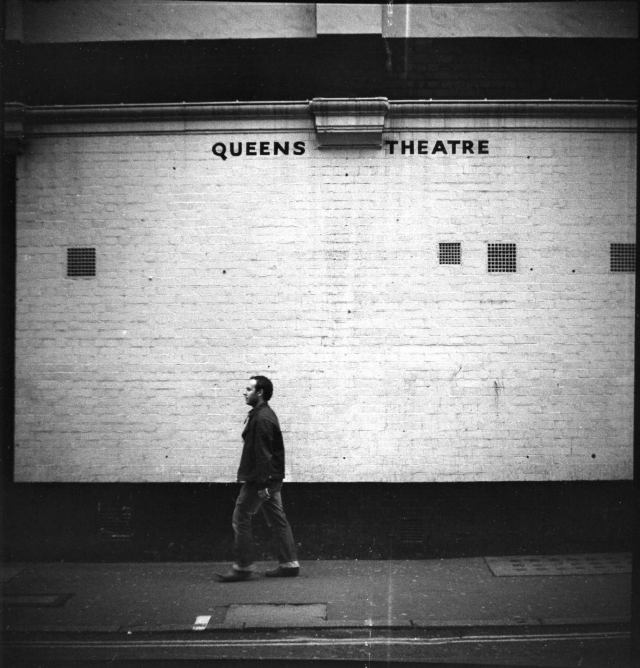 Jeffrey Bernard (1932 – 1997).  Resident of Soho for almost fifty years; wrote for Sporting Life, and from 1975 The Spectator.  His column Low Life appeared weekly, apart from when drink and drink related illness caused the magazine to post the notice “Jeffrey Bernard Is Unwell”.  Keith Waterhouse wrote the stage play Jeffrey Bernard Is Unwell in Bernard’s lifetime, and Peter o’ Toole played Bernard in the London stage production.

Frank Norman (1930 – 1980) was mostly in Barnadoes homes as a boy, and after that he was involved in petty crime, ending up doing a three year stretch in Camp Hill Prison, Isle of Wight.  Out of prison he was encouraged to write, and became known for Bang to Rights,  Fings Ain’t Wot They Used T’be, and Banana Boy, amongst many.  He was also a “face’ in the Soho scene.

127 film had been a popular film for many pre-war and post-war years (which also included colour 127 film), used mostly in cheap (Kodak Brownie 127 cameras, for example)) to moderately good cameras, and in one or two cases very good cameras, such as the Baby Rollei by Rolleiflex.    By 2007 when these Soho photographs were taken the only world wide source of 127 film was still being made in a factory in Croatia using a 1940s formula.   Production has since ceased.

Photo snaps from the Third Reich to the Munich Olympics.

America at Home: the Kodachrome slides